Back in 2013 I wrote a little thingy on browsing with a SE/30. With recent developments in security and the push by Google and many others towards encryption and pushing sites to be full https we encounter a number of issues on our venerable hardware. For one, encryption adds significant overhead to processor usage and an increase in page load times. In addition we now live in the age of Heartbleed and POODLE which have broken SSL3, and so most if not all smart sites no longer support SSL3 connections. This is not even to mention the now obsolete RC4 and MD5 encryption ciphers which have serious vulnerabilities.

I hardly need mention that the most modern browsers for 68K were made over a decade ago the most modern of which is iCab 2.99 which was released sometime in the mid-2000's. My favorite is Netscape 4.0.8 while Internet Explorer 4 is an option as well as Wannabe and Lynx fill out the text only ranks.

With most sites going away from HTTP and SSL3 in favour of TLS many browsers can't even attempt to begin loading pages as they have no common language anymore to speak, not that they rendered well on the modern web anyhow. (I mean hey, we all knew this day was coming).

So, as with all things 68K, I had to find a way to hack it, so at least we had some common language, and heck if we can help out our old browsers a bit with cleaning up pages before they arrive, all the better!


This page will be split into two parts. Part 1 will deal with compiling Squid and OpenSSL for SSL Bump and SSL3 support respectively. Part 2 will deal with the Macintosh end of things.

Working at a school I'm quite familiar with content filtering to keep the youth of this generation on the straight and narrow, one tool in our arsenal is Squid. Squid is an internet proxy that also has a nifty feature called SSL Bump. This allows the proxy to intercept SSL or TLS connections and modify the connection before it allows it to pass to the client. This is what is known as a Man in the Middle exploit and it's becoming increasingly hard to make work in the days of new methods to mitigate this kind of exploit (much to the chagrin of this parent and IT person).

For our purposes we're going to take that incoming hyper-secure TLS connection with some fancy high cipher encryption and present a new certificate to the client with a weak cipher and a SSL3 connection that will be compatible with Internet Explorer 4.

The reason I've chosen IE4 is because I was not able to get Netscape 4.0.8 happy with certificate. iCab would have been my second choice but it only offers a proxy for http connections.

Installing and Compiling OpenSSL with SSL3 and Weak Ciphers

I'm assuming you know how to install a base install of Debian on a VM or real machine and give it a static IP on your local network.

K... For some reason this doesn't work to build with a root user, so might as well do it as a normal user.

2. Buildest a directory 3. Grabbest the code 4. Open the rules file 5. Modify the rules file to include the following flags on the CONFARGS line. Yes I've enabled SSL2 as well for compatibility. 6. Build the package 7. What you'll get now is a bunch of deb and udeb files in your directory. You can now install them by issuing the following... 8. Prevent openssl and libssl-dev from updating
Installing and Compiling Squid with SSL Bump

1. First some prerequisites (all run as root user cuz this works differently for some reason... Or I just don't know something which is totally possible): 2. Grab source: 3. Modify build rules file: 4. Add the following lines under DEB_CONFIGURE_EXTRA_FLAGS 5. Build the code! 6. Deb files will appear again after the build procedure. Install those nuggets.
Configuring Squid for a Basic Connection

We need to configure rules to allow our client to pass its traffic through this server:
1. Write some rules
2. <your_eth> can be found by running the ip address command on your server to determine your ethernet card alias. Mine is eth0. 3. install iptables-persistent. This will preserve the rules between reboots. We've placed the rules in first as iptables-persistent will generate its config off of the current rules. From here you should now reboot your server and test your config so far... reboot now

After some testing between IE 4.0.1 and Netscape 4.0.8 I've had better success with IE 4. First, it seems to render pages more faithfully and secondly I can't for the life of me get Netscape to work for me even with Squid bumping on. My major issues with IE however are that it crashes fairly regularly (taking OS 8.1 with it) and it doesn't render PNG images unlike Netscape.
The PNG issue can be overcome and we can tweak some other things to help it behave better as I'll show below... The PNG fixing will come a bit later in another page I think.

By default this is what we get browsing to Google without a proxy or anything configured. 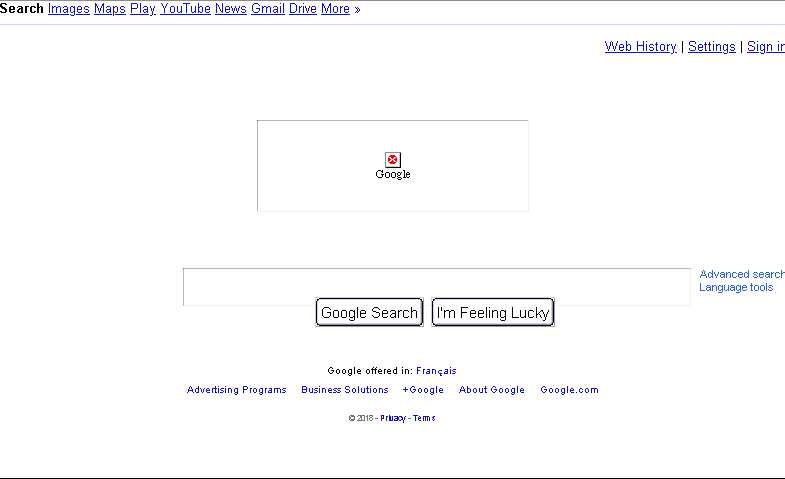 Oh... don't even try getting into an https configured page.... Here I am trying google as a https. No common protocol. 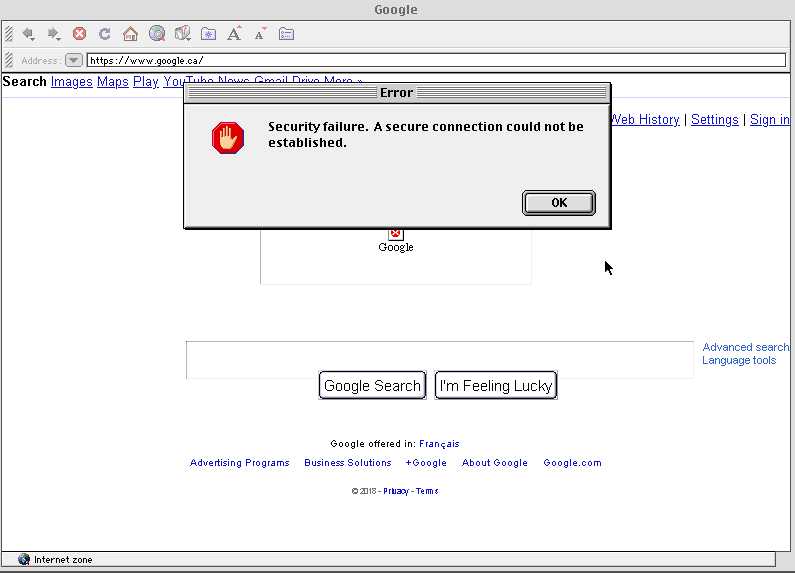 Let's tweak the settings in IE a bit...

1. Go to Edit - Preferences...
2. Turn off scripting. It just gets messy when ancient Javascript engines try to do something like load a page. Best to turn it off 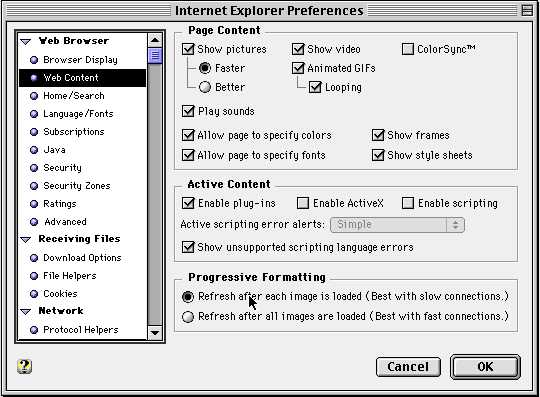 4. I also hate getting a whole bunch of messages when we change zones. We can disable those settings too.

5. Next lets configure the proxy. You can configure yours using the settings I have below but using your own server IP. Notice I'm putting in the default port for Squid for both Normal and Secure settings just like we put in our IP Tables above. 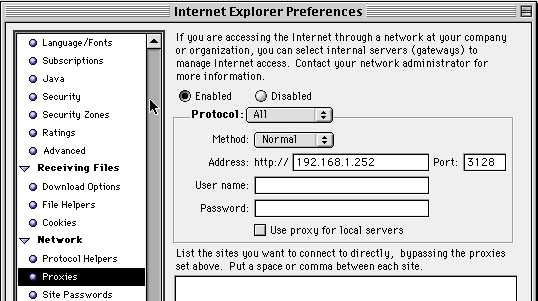 Be careful... I've noticed that sometimes my settings for the secure proxy spontaneously revert to tunnel for some reason. Make sure this remains normal

6. Let's try it now... K... Not really sure what exactly this means, does it mean that there is no installed root certificate for our server? Does it mean the server is sending stuff in clear text? I'll have to dig into this further with some packet sniffing later. But it says continue... who cares. Click past it. 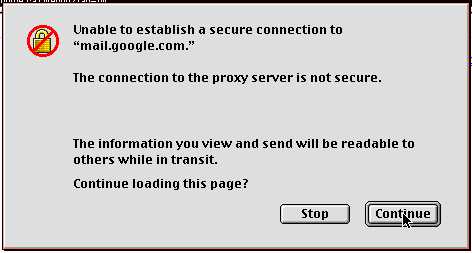 Voila! Look at that, common protocol, and now we're back in! 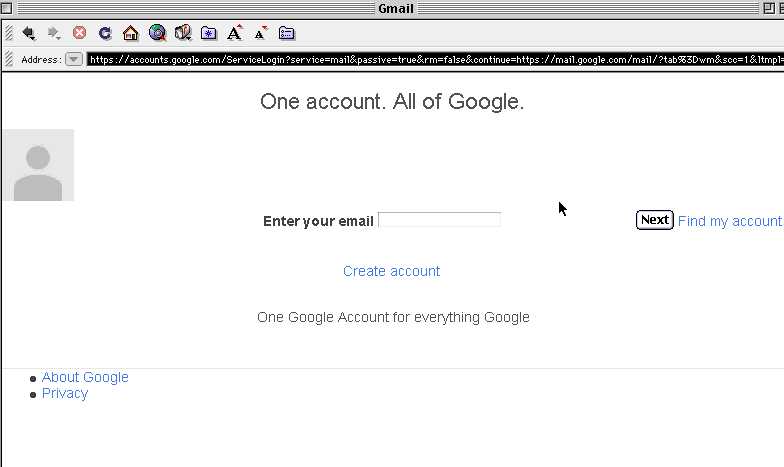 Stay tuned for Part 3. There I will explain how to pretty up pages by using squid to compress images and other content modifications.