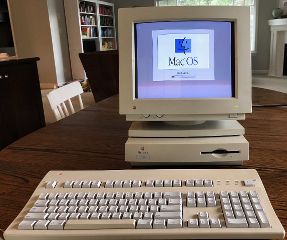 This machine was given to me after having sat in storage for something like a decade. I think it was stored in a wood shop as it was covered in a fine layer of sawdust in addition to being very dusty on the inside. Yellowing on the case was moderate and internally there was a mess of leaky electrolytic capacitors as is becoming increasingly more common as Macintosh computers from the 90's age.

I attempted a boot in it's original state but I got nothing but static as a startup bong and no video on the screen. The video was caused by a dead clock battery but it was time for a re-cap anyhow so I decided to do a full restoration job from top to bottom.

In addition to the recap I cleaned and re-greased the floppy drive, which was fairly stiff. The case I put through the dishwasher for a good clean followed up by Perifractic's air-bright technique in the hot summer sun to de-yellow the case. I have to say, after three days the case looks very much better!

Oh yea, in order to get video, I plugged in one of my 3D printed battery adapters. See the link to that page below.

All benchmark tests happened on System 7.6.1 using the SCSI to SD controller using Speedometer 3.23. HDD scores aren't included as the SD adapter can't reach the full speeds of the SCSI controller on the LC475.